“It’s Not Just About Bragging Rights”

When Open Data Watch began work on the Open Data Inventory (ODIN), we asked ourselves, “Does the world need another index?” We recognized the tendency for indexes to become league tables, glanced at to see who’s on top, and then forgotten. We wanted ODIN to be something more: a guide for increasing the openness of statistics produced by public agencies for the public. We also wanted the ODIN results to be objective and reproducible and comparable across countries and over time.

Still, you can’t help wanting to see where your country stands in the world or in its region. A little friendly rivalry can be a useful stimulus to making further improvements. 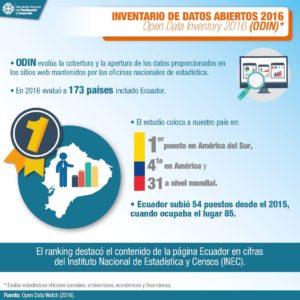 Ecuador’s statistics office was disappointed by their 2015 ODIN score. They thought they were doing much better than a score of 24 (out of 100) suggested. When they looked at the detailed ODIN results, they found that their greatest weaknesses were in providing data in non-proprietary, machine readable formats and in publishing open terms of use. They also saw that important categories of data – particularly economic statistics – produced by other government agencies were not available on the statistics office website. So they reorganized their website, making it much easier to navigate, and provided data in open formats with open terms of use. In 2016 their score jumped to 56, placing them first in South America. Ecuador still has room for improvement, but so does every country included in ODIN.

What is important is how countries make use of their scores. Canada provides a great example. 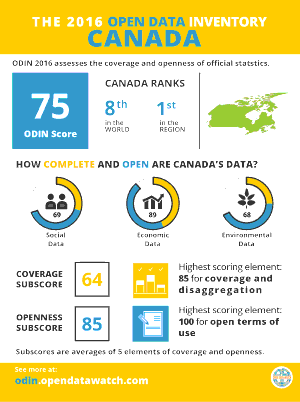 Canada came out number one in North America and eighth in the world with an overall score of 75 and scores of 85 for openness and 64 for data coverage.  Reviewing their ODIN results, Statistics Canada observed, “The ranking is not just about bragging rights—it is a sign that we are meeting international open data standards and principles.” But, not content to sit on their laurels, they published a blog to discuss what they are doing to improve the openness and availability of data on their website: The Road to Open Data. Statistics Canada is implementing their New Dissemination Model, which, when completed, will provide better access to more data through a clearer roadmap. They will also implement API access to their data, giving users more options for selecting and linking to data. Perhaps they will emerge as number one in the world. Who knows? Their willingness to accept feedback and use that as a stimulus for further improvements makes them, like Ecuador, model data citizens.

In 2017, we are doing more to increase engagement with countries that wish to review their ODIN results, answer their questions, and get their feedback. ODIN has been included in SDG roadmap workshops to plan data dissemination and articulate goals for open data. We will be at Ghana in early April for such as exercise.

ODIN also benefits from feedback. If we have overlooked data sources or have not scored them appropriately, we want to hear about it. The guide to our methodology is here: ODIN 2016 Methodology Report. Contact us at ODIN-input@opendatawatch.com. In preparation of ODIN 2017, we are implementing a formal feedback process to allow national statistical offices to alert us to new or overlooked features of their websites.