Better Data for All

by
Mayra Buvinic and Shaida Badiee

(This blog originally appeared on the Center for Global Development website)

Earlier this month, nearly 50,000 people from civil society organizations, governments, and corporations convened in Paris for the Generation Equality Forum to define and announce bold commitments to advance gender equality and women’s empowerment across the globe. This mostly virtual forum culminated in the launch of a global 5-year action journey to accelerate gender equality by 2026 backed, for the first time ever, by significant financial resources. Forty billion dollars in new funding were committed over five years — $23 billion by the public sector, $13 billion by the private sector, $4 billion by philanthropic organizations and $1.3 billion by UN entities. Now begins the hard work of spending these resources wisely and the even harder work of tracking expenditures and measuring their impact on the lives of women and girls everywhere.

Improvements in gender data, the basic units of information that are required to measure the impact of these financial commitments on gender equality, are urgently needed, especially in low- and lower-middle-income countries where the COVID-19 pandemic is further entrenching already wide gender disparities. Half or more of the data required to measure impact and to plan recovery in these countries are missing (See Figure 1). Without these data, there will be no way to tell if the $40 billion has been well spent. 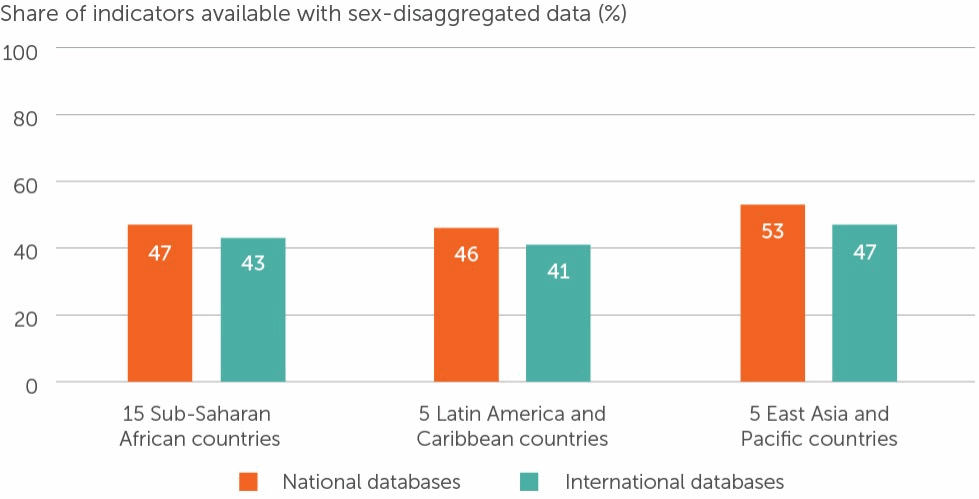 Rhetoric has yet to translate into investments in gender data

The needed improvements in gender data require financial resources to close data gaps and improve capacity to analyze and use gender data. Until now, and despite the rhetorical invocations of the “data revolution” and the “gender data revolution,” financing for gender data has remained flat, as an analysis by ODW and Data2X shows in Figure 2. 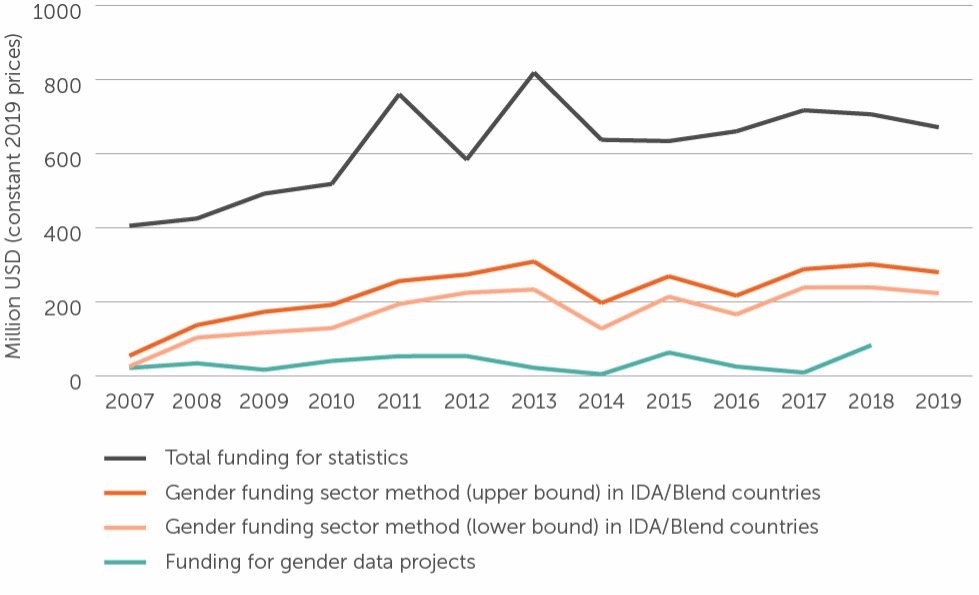 According to preliminary analysis from Data2X, only about 13 percent of sample GEF commitments released by the Action Coalitions addressed gender data, and fewer still referenced investment. While a range of speakers mentioned gender data and announced pledges to drive data collection and use—including compelling first-time commitments from the private sector to sex-disaggregate and publish private datasets—financing was rarely publicly addressed, nor were necessary investments detailed.

Commitments still fall short of the need. ODW and Data2X have calculated that donor support of $500 million a year is needed for core gender data systems in 74 IDA-eligible low- and middle-income countries, while donors currently provide only half that amount. We extrapolated from Data2X’s analysis of GEF’s commitments and estimated (generously) that these commitments could add about $100 million a year to improve gender data. If these are all new commitments, still another $150 million more will be needed every year for the next 10 years.

The multiple benefits of investing in gender data

Gender data are obtained from censuses, surveys, or administrative records of larger data domains, such as data on birth registration or labor force participation. Investments in gender data will improve the censuses, surveys, and administrative systems that produce health, education, employment and welfare statistics. Because gender data are cross-cutting and embedded in social and economic data systems, improvements in gender data will bring improvements in statistics in general, and particularly for socially excluded populations for both men and women, girls and boys. The result will be improved policies, better targeted programs, and greater transparency of results.

With the exception of data obtained exclusively from or about women and girls, such as maternal mortality, the ability to disaggregate information by sex is one of the main markers of gender data. While the aspiration is to have data disaggregated by people’s gender rather than their sex (and cross-tabulated by age, race, ethnicity, disability and other characteristics of socially excluded populations), official statistics to date can only be disaggregated by sex, a useful proxy for but not the same as disaggregation by gender.

There is no known formula to separate and attribute expenditures solely to gender. What we do know is that improvements to the systems that are used to collect data on gender will benefit everyone. Therefore, stakeholders who support gender data need to partner widely with data communities that share common data systems and support a coalition for more and better financing of data to build better gender data systems.

The Bern Network is championing such an effort through the Clearinghouse for Financing Development Data (to be launched later this year) that will include a dedicated focus on gender. Another promising platform is the Global Data Facility at the World Bank, a new fund to be launched soon to build collaboration among donors to finance the modernization of statistical systems. Thankfully, the need for more and better financing for data and gender data is high on the agenda of UN high level groups. It will also be treated as a priority at the upcoming UN World Data Forum in Bern in October 2021, which will bring together a large group of decisions makers.

Financing for gender data has not kept pace with the demands of a world that seeks to leave no one behind and build back better from the COVID-19 pandemic. The commitments made at the Generation Equality Forum represent a seminal investment in gender equality, but it’s too soon to tell whether these investments will translate into more and better gender data. It will take governments, civil society, and the private sector to continue to work together to make sure we have the data needed to track progress and measure impacts on gender equality.

Summarizing, investing in gender data systems is both urgent—to track the commitments made at the Generation Equality Forum—and smart—it will have multiple benefits, strengthening gender and social statistics and helping to ensure that no one is left behind.

Meet the Researchers Behind the Open Data Inventory
27 July 2022