​by Shaida Badiee and Eric Swanson

The World Bank’s recently released poverty report, Ending Extreme Poverty and Sharing Prosperity: Progress and Policies, brings news that the rate of extreme poverty in the world declined again in 2012, reaching a global average of 9.8 percent of the world’s population, although a more relevant figure places it at 15.7 percent of the population in “developing” countries.1 The new estimates also mark the appearance of the new “dollar a day” poverty line, set at $1.90 in 2011 prices using the purchasing power parities (PPPs) from the 2011 round of the International Comparison Program (ICP). With 190 countries included in the ICP and 1165 income or expenditure surveys in the World Bank’s PovcalNet database, these are surely the most comprehensive estimates of monetary poverty yet produced.​ 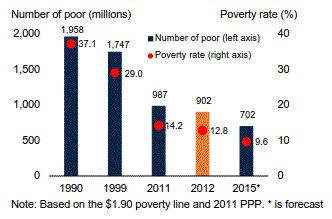 But something is missing. In 2014, the World Banks Independent Evaluation Department (IEG) published an evaluation of the World Bank’s poverty reduction efforts. The report, The Poverty Focus of Country Programs: Lessons from World Bank Experience, looks at five aspects of country poverty programs and, appropriately, puts data first.  According to the IEG, implementation of the World Bank’s ambitious program to eliminate extreme poverty by 2030 – consistent with the Sustainable Development Goals – faces many obstacles, among them the lack of regularly reported, high quality data. Of the 139 countries classified as low- and middle-income economies (the World Bank’s pragmatic definition of “developing”), 22 have no data for the past three decades, some 30 countries have not had a household survey in the past decade, and some 20  more have had only one survey since 2000. More than one-third of these countries are in Sub-Saharan Africa. The report goes on to note that among the 30 to 50 surveys added to PovcalNet each year, 80 percent are from middle-income economies.2 The figure below, taken from the report, shows the rates of addition of new surveys since 1980. Additions to the survey database have been declining in recent years and the number of surveys within five years of a given date – those used to produce current estimates of poverty – has topped out at around 225. 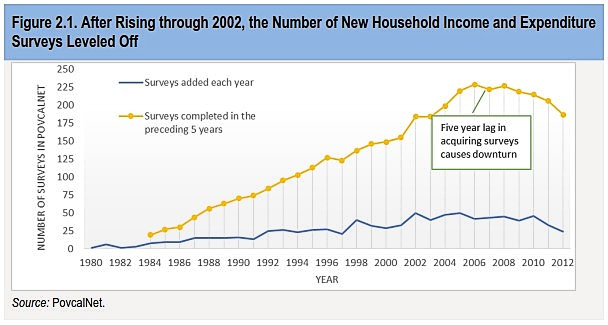 The Sustainable Development Solutions Network (SDSN) has published an estimate of the costs of providing the data necessary for monitoring progress toward the SDGs. Based on advice of development experts, Data for Development proposed a minimum of three household income and expenditure surveys over the fifteen year SDG period. The cost of conducting such a program in 77 low- and lower-middle income economies – those most in need of development assistance – is estimated to be $400 million in total or $26.7 million a year. Hardly a financial stumbling block, but there has been no commitment to date by the World Bank or any other international sponsor to ensuring a program of regular, reliable data collection.

The problems of building and maintaining a usable poverty database are more than financial. The IEG conducted a poll of World Bank staff involved in poverty work asking them what are the main constraints to poverty data collection. Their responses are summarized in the figure below. Insufficient capacity in the government agencies responsible for collecting data was the most frequently cited, and lack of political will within the government ranked third. Political will covers a multitude of obstacles from a refusal to collect data to unwillingness to release data for analysis. Many surveys known to World Bank staff are not available to other analysts or even to the citizens of the country. Even where data are regularly collected and available, the lack of standards for survey design and data collection methodologies makes comparability between countries and over time difficult. These and other problems are compounded by a lack of coordination among survey sponsors.​ 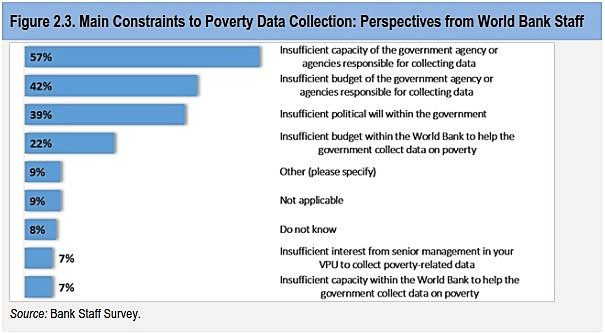 Like the MDGs, the success of the SDGs will be judged first by success in achieving the headline indicator of poverty reduction. Over the MDG period global poverty rates fell by more than half, although Africa and South Asia lagged behind. The SDGs have taken on the much more ambitious goal of eliminating extreme poverty wherever it occurs. Without better poverty data, collected more frequently, and open to all, we will never know if that goal can be achieved. This will need a multistakeholder collaborative process. The new Global Partnership for Sustainable Development Data  has already brought together many countries and organizations to work towards filling SDG data gaps and making the data they collect more comparable, open, accessible, and, most importantly, making better use of data to end poverty.

Shaida brings several decades of experience in managing global development statistics as the long-time Director of the World Bank’s Development Data Group. During her tenure, flagship global statistical products were launched such as the World Development Indicators, Global Development Finance, and the Atlas of Global Development. In 2010, she led the World Bank’s Open Data Initiative, a ground-breaking program to provide full and free access to the World Bank’s extensive statistical databases. Prior to that, she played a key role in the creation and operation of PARIS21 as well as leading international efforts to coordinate technical and financial support for statistics through initiatives like the Marrakech Action Plan.