At COP26 this week, questions abound: Will countries make the commitments needed to avoid the worst effects of climate change and build a sustainable future? What amount of financing will high-income countries provide to assist other countries to adapt to the ongoing effects of climate change? What are the most effective policy interventions to curb greenhouse gas emissions and where can existing solutions be scaled?

High quality, open data are crucial to answering these and a host of other questions about climate change and the environment. The Open Data Inventory (ODIN) framework gives us two ways to think about whether the data we have are good enough: Coverage, which measures whether we have enough data points, and Openness, which measures whether the data are available for effective use.

In August 2021, the Intergovernmental Panel on Climate Change (IPCC) Working Group 1 released their contribution to Assessment Report 6 (AR6) that contains the world’s most updated and universally accepted statement on the state of the climate science, much of it summarized in the Statement for Policymakers (SPM). The report’s findings have been written about extensively, but less has been said about where data are still needed to make accurate predictions about the impacts of climate change.

We now have more data than ever to drive climate prediction models. The New York Times emphasized in their takeaways from the SPM that ‘climate science is getting better and more precise.’ Yet challenges remain: As reported in Africanews, data are still missing for many regions, particularly in Africa as shown in Figure 1. This lack of local data hampers efforts to mitigate or adapt to the effects of climate change in regions that have contributed least to climate change but have the most to lose from climate disasters.

Figure 1 Limited data stand in the way of understanding the effects of climate change, in this case heavy precipitation

Source: Figure SPM.3 from SPM, the rest of the figure details observed changes in hot extremes and droughts

Figure 1 shows us where observed changes are happening or where data are missing, but not who will be affected by this lack of data. Table 1 highlights which information is least available for the greatest number of people using the information in Figure 1 (in addition to information on changes in hot extremes and droughts) combined with a geospatial mapping of world population (see methodological note). The findings are stark: The majority of people on planet earth live in regions that will experience an increase in heat extremes, much like those that have made headlines across Europe and North America this year. Yet information is not available for regions accounting for 137 million people, nearly all of whom live in Africa.

Not enough information on changes in agricultural and ecological drought is available in regions where over 180 million people live, including half in Africa, where countries are heavily dependent on agriculture for sustenance and livelihoods. Additionally, information on changes in heavy precipitation that can cause terrible flooding (as in the aftermath of Hurricane Ida in the US, in Western Germany, and in Eastern China) is least available. One and a half billion people, one in every seven on earth, live in regions where this information is not available to make vital observations about the course of climate change events. Two-thirds or 1 billion live in Africa and 280 million in South America.

The recent IPCC report is not the only place where the paucity of environmental data is evident. The 2020/21 ODIN report found that Pacific Islands and African countries have the lowest coverage for environmental data, with Agriculture & Land Use, Built Environment, and Pollution among the least available data in official statistics worldwide.

Environmental data must not only be collected, they must also be open to allow their use in climate models and policy decisions to avert the worst effects of climate change. Yet environmental data are the least open data category according to ODIN 2020/21 as shown in Figure 2. Making data open means making data available in machine readable and nonproprietary formats with download options together with metadata and clearly stated terms of use. At a time when the ability to use and combine data across countries, industries, and partners is of paramount importance, low marks for environmental data spell trouble and need to be improved. 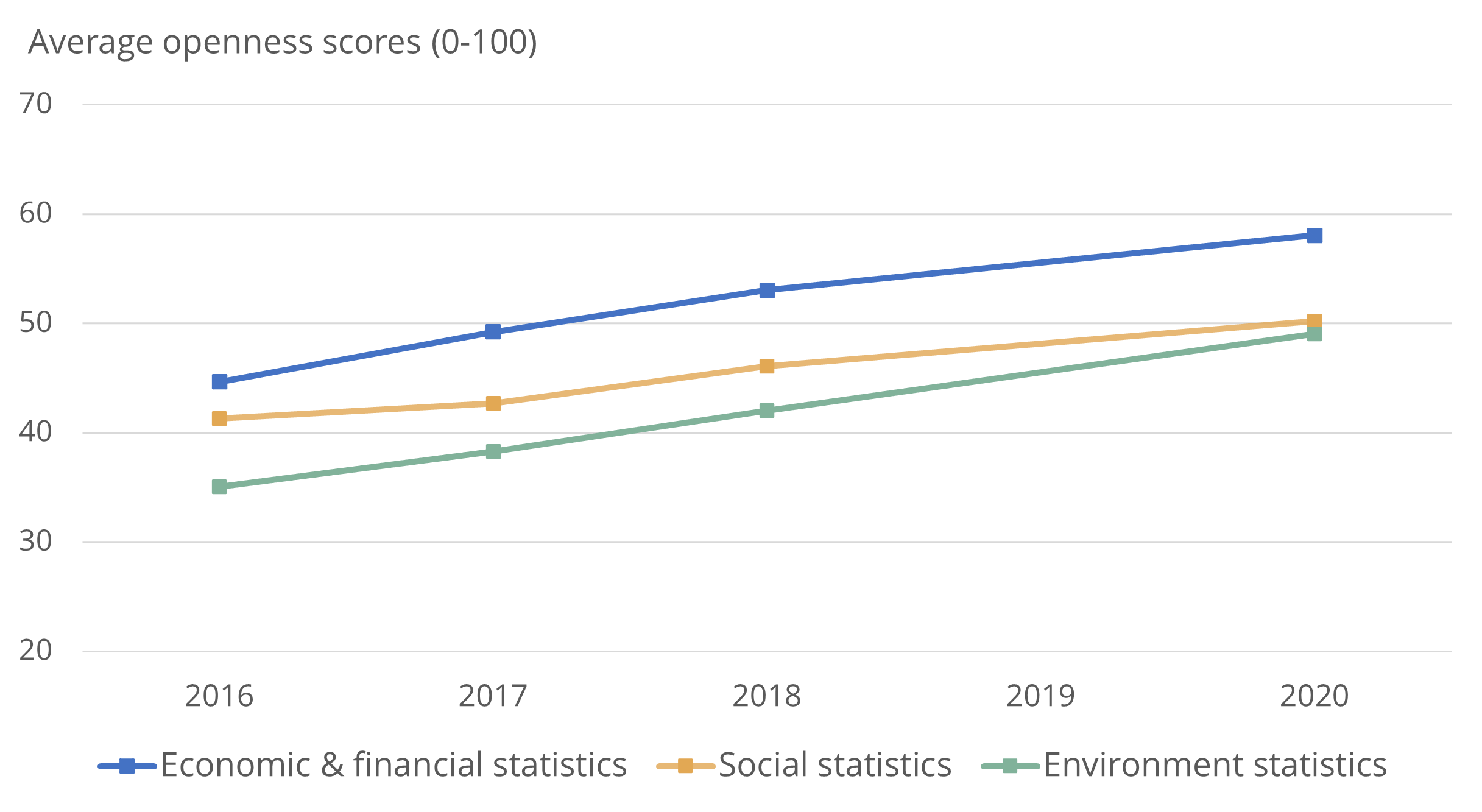 Energy data are particularly important for building a complete picture of how attainable each country’s commitments to reduce emissions are. Energy data, as measured by supply and consumption in ODIN 2020/21, have higher than average coverage scores, but they are much less open. This reflects country capacity to collect and willingness to publish data, but a further step towards making these data useful involves harmonizing them to allow governments, the private sector, and citizens to make well-informed energy choices, spot opportunities for investment, and hold companies and governments accountable.

The International Energy Agency (IEA) collects data on primary and final energy supply from countries and other partners and harmonizes them in high quality and very valuable datasets. These are used by modelers such as those working on IPCC assessments.

But, as detailed by Max Roser and Hannah Ritchie of Our World in Data, they are unavailable to the general public because the IEA is required to “[raise] a small share of its budget through licensed data sales.” This stipulation by its members, 30 high-income countries, means that the data are subject to a very restrictive data license that does not allow for open use of energy data. According to Our World in Data, the gap in IEA’s budget filled by license sales is a mere 5 to 6 million USD, a paltry sum compared to the potential value unleashed if these data were available publicly. The IEA’s member countries must lift this restriction to bring the world closer to open energy data.

At COP26, there is still much that data cannot tell us about certain regions or the different energy mixes of some countries. Filling these gaps in coverage and openness through better data strategies for data on climate change will be essential to responding to climate change. However, the science thus far is also clear enough to act now: We need strong action to prevent the worst effects of climate change and help lead humanity to a more sustainable future.

Information for the AR6-WGI Reference Regions is sourced from the shapefiles available here. These outlines of regions are combined with a geospatial mapping of world population for 2020 consistent with national censuses and population registers. QGIS version 3.16.10-Hannover tool Zonal Statistics was used to sum populations by each IPCC reference region.